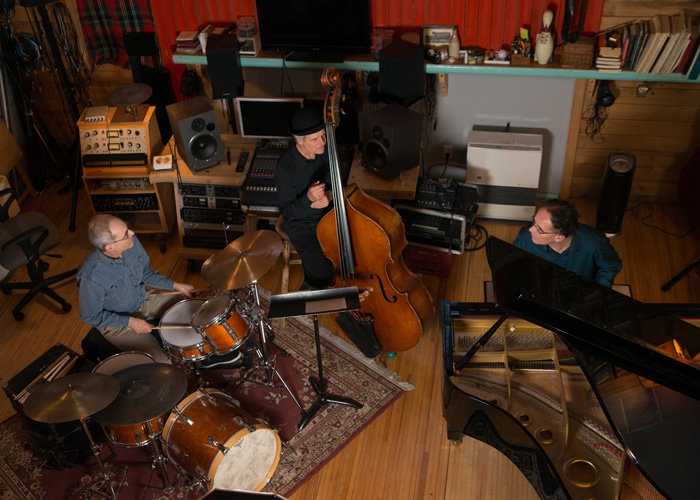 The trio has performed as a rhythm section for many different artists and projects. During this time, the trio discovered their shared passion for contemporary jazz and improvised music. They began meeting once a week in the winter of 2014/2015 and during the summer of 2015 at Daniel Janke’s studio near Whitehorse, Yukon.

The weekly sessions were initially to get together and play, share music they were currently listening to, develop ideas, and create a repertoire. As a “unique trio voice” started developing, they decided to share this voice and the album project was born.

The Winter Trio has a unique approach to the classic jazz piano trio based on the members collective experience in a wide variety of genres and styles. The trio draws from both American and European jazz traditions as well as more modern approaches.

Daniel Janke (piano) is an accomplished pianist, recording engineer, and has composed music for concert, theatre, film, and dance.

Daniel spent 12 years living and working in the Toronto jazz scene, during which time he toured and recorded with many musicians including Rick Lazar, Mark Kelso, George Koller, Artie Roth, Holly Cole, Perry White, and Ernie Tollar. He recently collaborated on a new CD release and toured with Montreal-based violinist Mark Fewer. Daniel is composer and pianist on the multi-media touring show Grubstake Remix, scheduled to perform in Berlin this coming September 2017. His piano style is informed by gospel, contemporary, and world music traditions.

Daniel is based out of his studio, Northern Town Films, near Whitehorse, Yukon.

Paul Bergman (bass) has spent over 40 years studying and playing all styles of music from Classical to Jazz. He has toured throughout Canada as well as being involved in the jazz and other music scenes of Montreal, Vancouver and Ottawa.

Since moving to the Yukon, he has performed with a wide variety of artists including Daniel Janke and the Longest Night Ensemble, Atlin and Dawson music festivals, and with the Whitehorse Classical Orchestra. Paul has accompanied a number of artists to Breakout West events in Winnipeg and Victoria.

Ken Searcy (drums) brings a wide range of experience to the drum set from his 40 years of freelance professional work in Calgary, Edmonton, Toronto, and the Yukon.

Since moving to the Yukon he has worked with Daniel Janke on a number of Longest Night concerts as well as recording the Longest Night Ensemble album “Not Too Dark”.

This site uses Akismet to reduce spam. Learn how your comment data is processed.